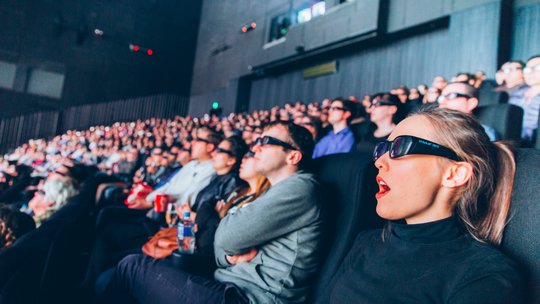 Movies are made to be watched in IMAX. From our crisp IMAX 4K Laser format to the towering seven-storey screen and hair-raising surround sound, there’s no other cinematic experience like it.

IMAX Melbourne is the only theatre in Australia with an operational IMAX 1570 Film projector. 1570 Film has a native resolution of up to 16K, far higher than any other format. The combination of the superior image quality, the scale of the presentation and the natural warm tones of the film print creates a truly immersive experience. Learn more about IMAX 1570 Film.

We are home to the world’s largest cinema screen, measuring 32 metres in width by 23 metres in height, and this unrivalled scale transports our audience right into the action.

The distinctive configuration of an IMAX theatre is designed to bring the audience not only closer to the screen but better positioned in relation to it, through the placement of the seats, the width of the theatre and the curved shape of the screen. The result is an image that’s wider and higher than your field of view, making you feel like you're part of the onscreen action.

Digital remastering is a transformative proprietary process that turns an already-powerful movie into a breathtaking IMAX blockbuster, with unparalleled image and sound quality. The saturation, contrast, brightness and hundreds of details in every frame are meticulously adjusted to create the exclusive IMAX format.

The earth-shattering sound of the IMAX Melbourne theatre is generated by our custom 15,000 watt digital speaker system. The 12-channel system positions speakers strategically throughout the theatre, including four channels behind the screen, four surrounding the seats and another four overhead. Aided by the theatre geometry, the powerful sound and vibrations envelop our audience to create a fully immersive movie experience.

3D requires two images – one for each eye – to be projected onto the screen at the same time. Designed and purpose-built as a 3D theatre, IMAX Melbourne uses two 4K Laser projectors (one dedicated to each eye) to ensure brightness and clarity onscreen for the highest quality 3D experience, no matter where you’re seated.

OUR COMMITMENT TO YOU

Our team is committed to delivering an exceptional customer experience. We invite you to enjoy an engaging and memorable experience from the moment you step through the doors at IMAX Melbourne.

We look forward to seeing you soon!